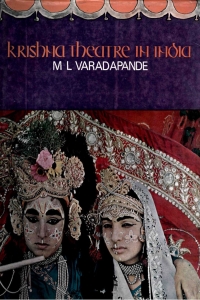 The impact of Krishna cult on Indian art, literature and culture is stupendous. Krishna worship includes music, dance, drama, which delights him most. Bhassa describes him as Sutradhar, string-holder, of the drama of life that is being enacted in all the three worlds. Bhagavata Purana eulogise him as Natavar, supreme actor, and enjoins the devotees to offer him theatricals on festive occasions. Inscriptions speak of the tradition of enacting plays in the Krishna temples.

All over India plays based on Krishna theme are enacted. Indian classical dance forms take delight in depicting Radha-Krishna love lore. The Ras Leela of Vraj, Ankia Nat of Assam, Kala of Goa and Maharashtra, Krishna Attam of Kerala, Ras of Manipur, Odissi of Orissa Kathak of Uttar Pradesh are some of the traditional drama and dance forms that depict Krishna lore? Many Krishna plays are there in the repertory of Kathakali, Yakshagana, Kuchipudi, Tamasha and many other folk and traditional theatrical forms of India. In fact some scholars believe that Indian theatre itself has originated from the cult of Krishna that flourished in Surasena region.

This most colourful theatrical saga full of poetry, dance and music is narrated in the book by eminent scholar Shri M.L. Varadpande in a most attractive manner. In a style picturesque and lucid the author tells us how the dark-hued Krishna danced with milkmaids fair as champak flower on the bank of Yamuna and how the Indian traditional theatre and dance forms recreated this romance on the stage. The spectacular rainbow of delightful romance of Krishna’s eventful life as seen on Indian stage is charmingly revealed to the readers through the pages of this profusely illustrated book of infinite charm.