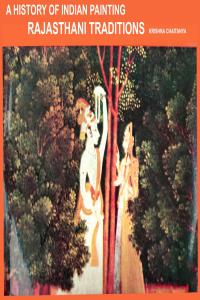 Indian painting is one of the greatest cultural traditions of the world. If the sustained joy that created it and gave it richly varied forms of expression through the ages has not so far been matched by a widely shared joy in appreciation, it is because art has been long mixed up with archaeology in India and has intimidated the layman.

Abhinav’s History of Indian Painting has been designed as a project which will take into account all the relevant research data and match the most scholarly work in its references, but will melt the material in a fluent and engaging narration, the images reflected in it being always the varied visions of beauty in the tradition. The first volume dealt with mural painting from prehistoric and protohistoric times onwards. The second volume covered the great transition from the mural to the miniature and also studied in detail Moghul and Deccani painting.

This is the third volume and it deals with a phase which is perhaps most the complex and fascinating in the whole tradition —the origins and evolution of Rajput painting. Like underground rivers, streams from the main medieval current flowed beneath the Moghul presence to nourish mutant strains which later evolved into
distinctive schools in Malwa, Mewar, Jodhpur, Bikaner, Bundi, Kotah and Kishengarh. The interaction of developing lines, meeting at various points in time and at different evolutionary levels, has made the historical reconstruction a challenging task for the author and an absorbing experience for the reader.

ONE PROBLEMS OF CONTINUITY
I. Encounter with Dogma
II. Literary Evidence
III. Cautions in Exploration

THREE REAWAKENING OF ROMANCE
I. The Love Story of Laurik and Chanda
II. The Chaura Panchasika
III. Central Indian Painting

FIVE MODULATIONS IN MALWA AND MEWAR
I. The Background
II. Malwa
III. Mewar

SIX MIXTURE OF STYLES IN MARWAR
I Jodhpur
II Bikaner

EIGHT MOOD MUSIC IN KISHANGARH
I. Discovery by a Romantic
II. Romance of Samant Singh and Bani-Thani
III. The Kishangarh Style

“The author infects the reader with his own enthusiasm. Where others have been busy counting the trees, he concentrates on the beauty of the woods. A significant contribution.”

— The Times of India